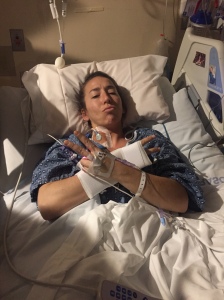 Where do I even start? It’s been a while. I haven’t wanted to put in the energy or emotion to update how things have been going. So here’s highlight reel of my massive surgery.

I had surgery on February 12. They cut me from sternum to pubic bone. They took out a pretty piece of my colon, the surrounding lymph nodes, and sixty percent of my liver. But they got all the cancer. After the surgery I’m now considered cancer free. Everything went as planned! The incision was straight which means the scar will be pretty. Initially there were some issues controlling my pain. Apparently most of the really intense pain medications (morphine, fentayl, dilaudid, tramadol, methadone, you name it they tried it!) I’m not very sensitive to. The nurse or nursing assistant would ask me my pain level on a scale of one to ten during their rounds. I’d generally respond, “Uhh around a seven or eight.” “Well are you pushing the button for your pain medication?” At the time I was on self serve dilaudid IV pain pump. “It just makes me fall asleep it doesn’t control my pain!” as I reluctantly push the button and drift off into a lethargic pain haze. But within the first week things were going as planned and I was stable. They had started me on a liquid diet and I was already walking almost a thousand feet in the hospital hallways. I was pretty excited, my parents were pretty excited, it looked like everything was going even better than expected.

Then… I started having more pain. I know I said that there were some issues controlling my pain but this was a nine out of ten pain that was constant and unrelenting. On Saturday night, five days after surgery, I “crashed”. It started with what felt like a maximal cramp of my lowest ab muscle that wouldn’t release and then worked its way segmentally up my entire abdomen. Maybe you can imagine, maybe you can’t, but at this point I have staples from my sternum to my pelvis so having every muscle in my stomach start progressively cramping was very uncomfortable, to say the least. Then, I started shivering. I didn’t have a fever, yet, but I’ve come to recognize since, that shivering is a severe pain reaction for me. The shivering just started in my jaw but then went through my entire body to the point where I was almost convulsing and it looked like I was having a seizure. I have a feeling it was a pretty intense scene. I’m convulsing and crying in pain, my mother is crying, my dad is threatening to call 911, the nurses can’t get the doctors on the phone, and I’m in the most excruciating pain of my life. After that things get fuzzy for me. I’m told I developed a 105° temperature and then my blood pressure started dropping and my oxygen saturation started dropping. They put me on an oxygen mask with six liters of oxygen and I was barely saturating at eighty percent. I was on my way out, folks. And by out I mean, dead. I literally almost died. I feel so good now it’s crazy to think of it as anything other than a scary story or a bad dream. I remember the following day in patches. I’m told I was “in and out”. There were lots of tests. One CT scan they tried to take me to, my vitals went unstable again and they had to wheel me back to my room so I wouldn’t die during the scan. Finally, I was transferred to ICU to await surgery the next morning. I remember having this thought as I lay writhing in nine out of ten pain, “People survive torture all over the world. If this were torture, would I talk to make the pain stop?” Sometimes my answer was “No, I can do this,” and I’d grit my teeth and pray. Other times my answer was “Yes, I’d tell them whatever they wanted to know.” In surgery, they opened me back up and gave me a colostomy inserted a J tube, and two drains. Turns out because of the chemo and my weakened immune system I got c-diff which caused the anastomosis of my colon to leak and form an abscess in my abdomen and I developed severe sepsis. 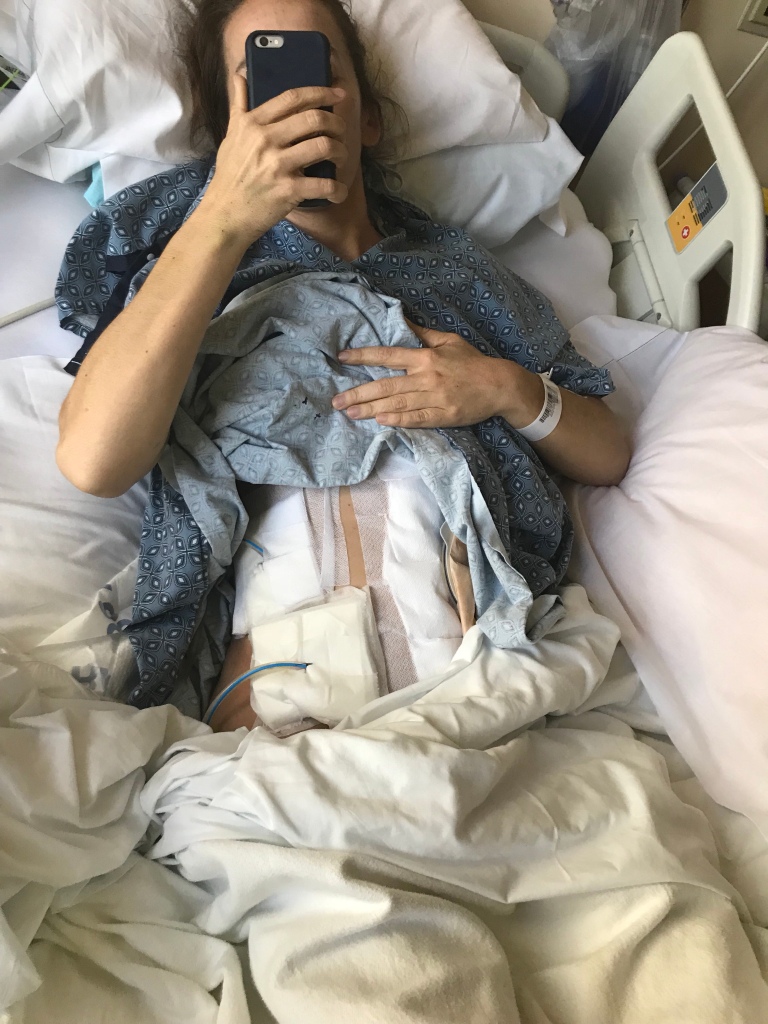 I distinctly remember waking up one morning in my third week of laying in bed in severe pain feeling miserably nauseous and this thought floated through my brain, “I’m not getting better and I’m going to die here.” No one had even mentioned the word “home”. I looked out the window of my hospital room and wanted to see the San Gabriel Mountains, my mountains. I wanted to think of home and have a hope of going home, an idea of being strong enough, well enough, to leave. It was an abstract thought. It was the darkest moment of my life. And believe me, I’ve had many “darkest moments of my life” the past couple months, this, by far surpassed them. I leaned over to my mom and said “I’m not getting better. We need people to pray.” Later that afternoon, I started to feel better, then the residents told me they were thinking of getting me ready to go home in two days. Coincidence? 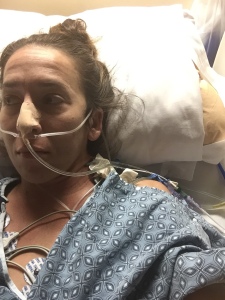 I had made progress, I was medically stable and they had finally found a pain medication regiment that worked for me and my pain was controlled, like a four out of ten. After weeks at an eight or nine, four was a dream. I could go home on a feeding tube with some drains and my colostomy. Not ideal but doable. The morning I was supposed to go home I started throwing up and running a low grade fever. So they held the discharge, did another CT scan and found I had developed another abscess and there was some fluid collecting in my left lung. They put in another drain and a chest tube, while I was awake. That hurt. But they were still talking about discharge and home was a concrete realistic expectation.

That’s how my fabulous surgery and short hospital stay turned into a month long very complicated hospital stay. But I finally made it home, weak and pain ridden. My abdomen looked like a science experiment of dressings and tubes and bags. I had lost a twenty seven pounds. Turns out a couple weeks without food and having too much pain to get out of bed makes you ridiculously weak. I could walk about twenty five feet before things got painful and I needed to sit down. This was not how I pictured my life after that surgery. I was feeling sorry for myself, let me tell you! Let’s not forget the narcotic withdrawals that magnified everything negative and uncomfortable and made me emotional. It was a rough week.

My dad put the whole thing into perspective when he said, “You know, a lot of people climb mountains thinking the summit is the goal. They focus on it, and dream of it, they work so hard to get there. But afterwards, they still have to get off that mountain. More people die on the way down than on the way up. That’s where you are. ” I had spent so much time just trying to get to that surgery that I hadn’t planned much for my after surgery recovery. Certainly not mentally or emotionally! 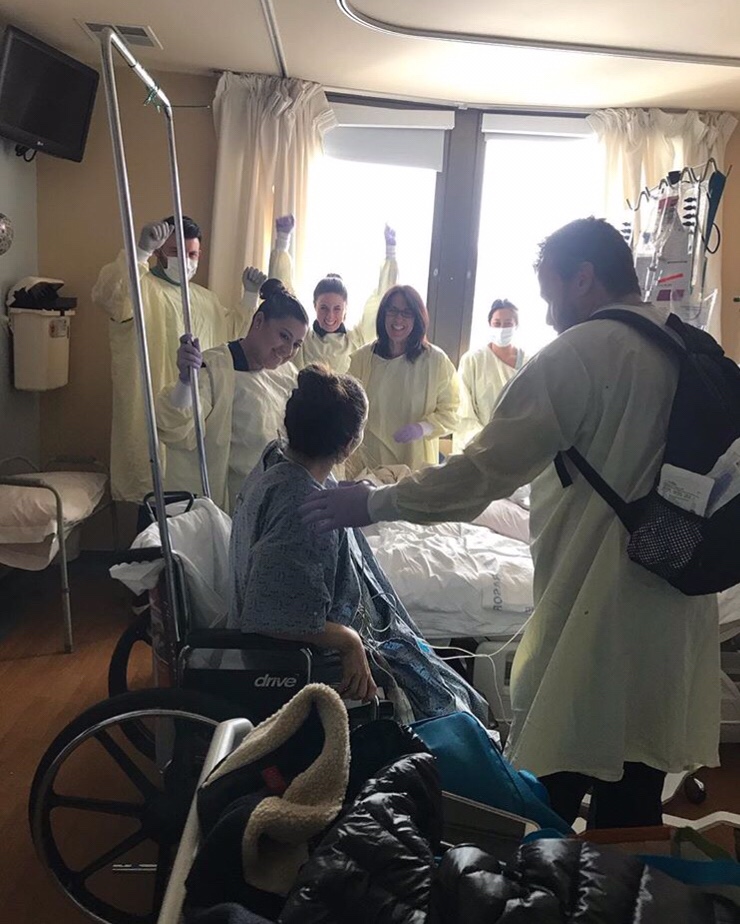 View all posts by Amy Pike